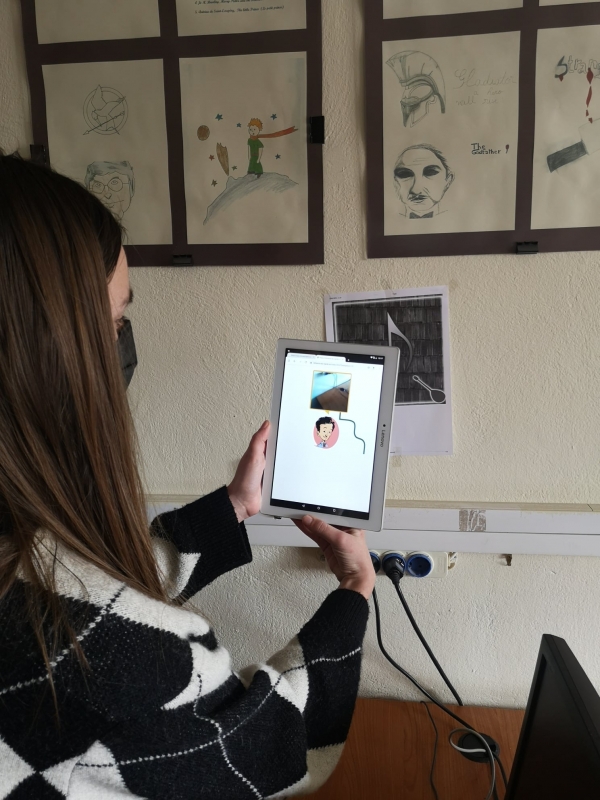 The children of the 5th High School of Trikala had the opportunity to play, but also to learn, where the program "Museum Pedagogy and Augmented Reality: recognizing museums as educational spaces (MonA Project) was presented.
Specifically, the children using tablets played the augmented reality game, which will be available inside the Research Center - Tsitsani Museum.
At the end of the process, the children gave their own impressions of the game, emphasizing that they had a good time and discovered aspects of the work of Vassilis Tsitsanis, the rebetiko song and the historic building where the Museum is housed.
We especially thank Mrs. Smixioti, Principal of the school, but also Mrs. Stoukogeorgou, teacher at the school, for the cooperation.

"The Game in the Museum"

The Covid pandemic has been affecting the work of museums in many ways. Due to Covid, NEMO Science Museum has been implementing activities for dissemination of the MonA Project in small groups. One of those events, "The Game in the Museum" included both teachers and students and took place back in December 2021.
Teachers learned the difference between VR, AR and MR and their different uses, while students tested the Game that NEMO created in the context of our project. At the end, a valuable feedback was gathered from both sides, through an evaluation with questionnaires.

Palazzo Lucarini presented the MonA Project to its local audience

In the pictures Palazzo Lucarini presented the  MonA Project and the outputs that were created to its local audience. The audience had the chance to learn what is innovative in our work and test the AR & MR Game of ours.
As a place of exhibiting contemporary art, young visitors can use their phones or tablets to play the Game created and discover the meaning of identity, freedom and more, while experiencing the partner museums too. 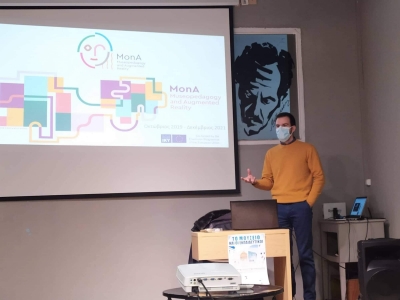 School educators are a vital part of students' contact with museums. They are the ones who will give the first stimuli before the children visit, so that they can better understand the history of the exhibits and collections during their visit.
The day before yesterday, the intellectual outputs of the MonA Project were presented to secondary and primary school teachers and a discussion was held on the benefits of integrating museums and their educational activities into school activities. 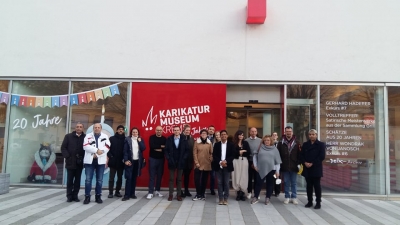 Meeting in Krems an der Donau, at the premises of Kunstmeile Krems Museum was an important step for the consortium of "MonA Project" to take before reaching the end of the project.
Participants of the meeting made progress towards finalising the intellectual outputs and had the chance to test the Game with the use of Augmented Reality inside the Karikaturmuseum Krems. Take a look at the playful cat that appears when scanning the first picture: isn't it exciting?
Between the meeting hours, the consortium was guided to the rich content of the State Gallery of Lower Austria, the Karikaturmuseum and the Kunsthalle Krems.

The Utilization of Museum Pedagogy in Primary Education

On Saturday, 11/09/2021, the event entitled" The Utilization of Museopedagogy in Primary Education "was successfully held in the event hall of the Tsitsanis Museum, Trikala, Greece. The event was organised by the Developmental Center of Thessaly (AKETH) in combination with the Directorate of Primary Education of Trikala, Greece.
During the event, the participants were introduced to museuopedagogy and learning within the museums. Also, the deliverables of the MonA Project and the innovative approaches that we apply in this corporate partnership were presented. There was also a presentation of STEM Education and the arts.

The 2nd LTTA was initially planned to take place in Austria, in the premises of IMC University of Applied Sciences Krems. But, due to Covid-19 the activity took place online. Museum educators and school teachers were the target group of this 4 day long activity, where participants got familiarized with the digital intellectual outputs that we have produced. The Virtual Tour Platform, the AR and MR Game and the application for smartphones that we have been working on were seen from an educational perspective both for museums and schools. How can teachers use a Virtual Museum Tour inside the classroom, in what ways can museums enrich their digital strategies and how can museums and schools collaborate in order to achieve their goals, were some of the questions that were discussed those days. Education and the digital are two subjects that we bring together in this project and we're very proud of that.

In the 4th TPM that took place online, at 30/06/2021, the consortium of the project discussed the next steps, expressed future concerns and reached some decisions. Participants of all the partner organisations - museums, univeristies, technology organisations and schools - were present and engaged in a 3 hour long discussion. The present situation of all the Intellectual Outputs was made clear and HvA presented an international Education Conference in which the consortium could participate with our 1st Output, the Guide on Museopedagogy with the use of Modern Technology. What all of us anticipate at the most is the the Game with Augmented and Mixed Reality that we are about to create and which will be played inside the partner museums.

Due to Covid-19 restricitons, the 3rd TPM of the "Mona Project" took place virtually, by using an online meeting platform. To this meeting, the project partners updated the consortium on the progress in all the intellectual outputs. EGINA presented a full schedule regarding the project's 3rd output, a Game with enhanced and mixed reality technology. Now that the working plan is finalised, our technicians will be able to build the educational experience. At the same time, museums will be able to collect the material that will be included in the game. Although we were not able to meet physically, for the past months we have effectively managed to keep track of everyone's tasks and deliver a professional work for our intellectual outputs.

Published in News
Be the first to comment!
Read more...

New technology is developing rapidly. But what can you use in the classroom? And how do you implement it in your museum? Register for this active online conference and let's get started with virtual reality in school or learn what to pay attention to when designing an exhibit with augmented reality.

The second newsletter of the Mona Project has been released. This is the second issue of our newsletter, covering events pertaining to the Mona Project from July 2020 to October 2020.
The newsletter is avalaible to download in the link below.
Published in News
Be the first to comment!
Read more...
Thursday, 25 June 2020 12:42

The Kick-off Meeting of the project took place last week on the 16th and 17th of December at the Reseasrch Center-Tsitsanis Museum in Trikala, Greece.

The meeting was attended by representatives of the four partner countries: Austria, Greece, Italy and the Netherlands.

Published in News
Be the first to comment!
Read more...
Page 1 of 2